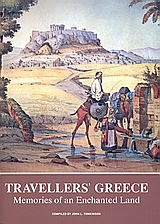 Βιβλίο
Traveller's Greece
Memories of an Enchanted Land
Ανθολόγος: John L. Tomkinson
Συλλογικό έργο
Edmond About
Thomas Dallam
Alphonse de Lamartine
Colonel William Leake
William Makepeace Thackeray
Joseph Pitton de Tournefort
κ.ά.
Αθήνα
Anagnosis
Αριθμός Έκδοσης: 2
2006
Ημερομηνία Πρώτης Έκδοσης: 2002
σ. 605
Σχήμα: 24χ17
Δέσιμο: Μαλακό εξώφυλλο
ISBN: 978-960-87186-4-7
Σημειώσεις: 1st edition: 2002.
Περιέχει Βιβλιογραφία
Φωτογράφηση: ΝΑΙ
Κυκλοφορεί
Τιμή: 32.61€ Φ.Π.Α.: 6%
(Τελευταία Ενημέρωση Τιμής: 12-12-2005)
Περίληψη:
More than one hundred travellers record their impressions of Greece over a period of more than three centuries, and recount their experiences in an enchanted land. The extracts show the travellers, the places they visited, and those they encountered, at their best and worst.
From many rare works now difficult of access, the compiler has extracted a great variety of writing, and a wide range of approaches to Greece, from the unashamedly romantic to the brutally cynical. Not merely a valuable repository of historical evidence, "Travellers' Greece" is an anthology which the non-specialist can read with pleasure from cover to cover.
Travel can be both refreshing and fascinating, but it is often arduous, occasionally dangerous, and usually expensive. For this reason, many of us prefer to supplement our real-life journeys with heavy doses of armchair travel.
The armchair traveller can journey in an age when there was more to travel than comparing the airport shops or the Macdonalds in different countries -in an age when to travel really was to encounter strange and exotic ways of life.
For centuries Greece has drawn foreigners in quest of its history and culture. Many wrote of a world which has since passed away. Yet their accounts of what they saw and can still be enjoyed today.
"Travellers' Greece" brings to the reader the pick of the best of the writings of some of these visitors to each distinctive region of this diverse and fascinating country, spanning over three centuries. Valuable historical records in their own right, these narratives are also marvellously entertaining. They depict ways of life which have passed away for ever. The also frequently betray, in the traveller himself, depths of egocentricity and prejudice which are no longer possible to educated people. Whether we admire the beauties of a vanished landscape, deplore the hard realities of lost ways of life, or smile at the smug self-absorption unwittingly revealed by the narrator, we are always engaged and entertained.