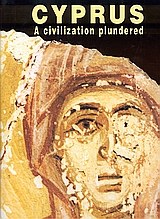 Βιβλίο
Cyprus. A Civilization Plundered.
Συλλογικό έργο
Μεταφραστής: Alexandra Doumas
Επιμελητής: Μαρία Αναγνωστοπούλου
Αθήνα
Ίδρυμα της Βουλής των Ελλήνων
Αριθμός Έκδοσης: 1
2000
σ. 237
Σχήμα: 34χ25
Δέσιμο: Σκληρό εξώφυλλο
ISBN: 978-960-560-018-1
Γλώσσα πρωτοτύπου: ελληνικά
Σημειώσεις: Under the auspices of the Hellenic Parliament's Committee for the Protection of the Cultural Heritage of Cyprus. Foreword: Apostolos C. Kaklamanis, Speaker of the Hellenic Parliament, Ioannis Pesmazoglou, President of the Committee, Sophocles Hadjisavvas, Director, Dept. of Antiquities of Cyprus, Maria Anagnostopoulou, Archaeologist, General Secretary of the CPCHC.
Φωτογράφηση: ΝΑΙ
Κυκλοφορεί
Τιμή: 25.00€ Φ.Π.Α.: 6%
(Τελευταία Ενημέρωση Τιμής: 18-11-2019)
Περίληψη:
The cultural heritage of every country ,- its monuments and works of art, embodies the inte1lectual presence and the power of the people that created it. Its property is the common property of mankind. Indeed, in an era in which Europe seeks union through freedom, the cultural heritage of the European peoples and its effective protection are part of the identity of our continent and the creative power of its people, an essential component of our future union, a common possession and legacy .
In Cyprus today the cultural heritage is being barbarously violated. After the Turkish invasion in 1974, the forced expulsion of the Greeks, the occupation, colonization and alteration of the demographic reality of the island, came the destruction, the desecration and the predatory buying and selling of the art treasures of Cypriot Hellenism.
This album deals with the cultural destruction in occupied Cyprus and denounces the Turkish violence that flouts international law to the detriment of monuments, works of art, buildings, which suffer maltreatment as witnesses to the centuries-long Greek presence in the region. The violence of a state which did not stop at military conquest and driving out the Greek population, but wanted to destroy or even to profit from the 'booty' that its army secured. The violence that obliges a European country , the Republic of Cyprus, to seek in the international arena ways of buying back and protecting its own cultural-spiritual property .This album should be seen as a formal declaration that we will not leave our cultural heritage at the mercy of vandals and smugglers. This publication is, in the end, an exercise of a legal right that we invoke, not only as Greeks but also as civilized people, as citizens of Europe and the world: as bearers of the ecumenical spirit that the treasures nowadays violated so vitally convey.
Thinking people the world over, as vehicles and fiduciaries of the global cultural heritage, have always considered it their duty to oppose transgressions of liberty , such as the building and maintaining of the Berlin Wall, and of another wall that nowadays divides the island of Aphrodite. It is to thinking people everywhere, in academies, spiritual and educational foundations, that we address our anxious appeal to participate in the noble effort to protect the Cypriot cultural heritage. And we appeal in particular to the directors of large museums abroad not to buy works originating from the looting of occupied Cyprus.
The plunder and destruction of Cypriot cultural property is an injustice that we must help put a stop to once and for all.
Ioannis Pesmazoglou
Academician
President of the Committee for the Protection
of the Cultural Heritage of Cyprus