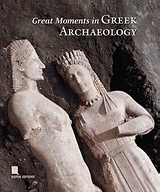 Presented here are the legendary sites of ancient Greece, including the Athenian Acropolis, Olympia, Delphi, Schliemann's Mycenae, and the Athenian Agora; the most iconic sculptures in the Greek world, such as the Aphrodite of Melos and the Nike of Samothrace; and several fascinating chapters on underwater archaeology that discuss the Kyrenia and Uluburun shipwrecks and the astonishing bronze masterpieces raised from the sea. This is the first book to bring together the archaeological legacy of ancient Greece in a concise and accessible way while still preserving the excitement of discovery.
Θέματα:
Αρχαιολογία - Ελλάς (930.149 5)
Ανασκαφές (Αρχαιολογία) (930.102 8)