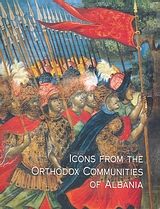 Βιβλίο
Icons from the Orthodox Communities of Albania
Collection of the National Museum of Medieval Art, Korcë
Eugenia Drakopoulou
Μετάφραση: David Hardy
Φωτογράφος: Makis Skiadaresis
Φωτογράφος: Georgios Fafalis
Φωτογράφος: Anastasia Tourta
Φωτογράφος: Nikolaos Vranikas
Θεσσαλονίκη
Υπουργείο Πολιτισμού. Μουσείο Βυζαντινού Πολιτισμού
Αριθμός Έκδοσης: 1
2006
σ. 207
Σχήμα: 29χ25
Δέσιμο: Μαλακό εξώφυλλο
ISBN: 978-960-89061-1-2
Γλώσσα πρωτοτύπου: ελληνικά
Τίτλος πρωτοτύπου: Εικόνες από τις ορθόδοξες κοινότητες της Αλβανίας
Σημειώσεις: Exhibition Catalogue 14.3-12.6.2006, Thessaloniki. Foreword: Nikos Zias, president of the Board of Directors, Anastasia Tourta, director of the Museum of Byzantine Culture, Lorenc Glozheni, director of the Museum of Medieval Art, Korce, Panayotis L. Vocotopoulos, professor emeritus of the University of Athens.
Περιέχει Βιβλιογραφία
Φωτογράφηση: ΝΑΙ
Κυκλοφορεί
Τιμή: 50.96€ Φ.Π.Α.: 6%
(Τελευταία Ενημέρωση Τιμής: 14-03-2007)
Περίληψη:
The exhibition "Icons of the Orthodox Communities of Albania: Collection of the National Museum of Medieval Art, Korce" brings icons from our neighbour to Greece for the first time. The icons come from the central and southern, preeminently Orthodox regions of the country, and cover a chronological span of six centuries, from the 14th to the 19th, offering a panorama of the religious painting that developed in these areas.
The icons of the 14th-15th century are mainly from the area of Korea, from the hermit's retreats at Great Prespa. A distinctive kind of monasticism developed here at this period and retreats were built in inaccessible caves on the lakeside. Many of these retreats are still preserved in both the Greek and the Albanian section of the lake. The icons, and also the wall-paintings that adorn them, are ascribed to the activity of workshops at Kastoria and Ohrid, and some of them reflect the Palaeologan art of Constantinople. After the conquest of the state of tsar Samuel by the emperor Basil 11, the autocephalous archdiocese of Ohrid was founded in 1019/20, centred initially on Prespa and later on Ohrid. In Byzantine times, it was an advanced outpost of imperial diplomacy in the Slav world, and its spiritual leaders were men of learning who were sent here from Constantinople.
The provenance of the Post-Byzantine icons in the exhibition covers a wide geographical range, the northernmost boundary of which is Tirana. They attest to the continuity of the Byzantine tradition in the religious painting of the Balkans after the establishment here of the Ottoman Turks, with Orthodox Christianity serving as an element unifying the subjugated peoples. They also reveal the ease with which painting trends and schools were disseminated, and the mobility and travels of painters within the vast area of the Ottoman empire. They emphasise the authority and prestige throughout the Orthodox world of Mount Athos, with some of the icon painters working at the monasteries there, and also the wide circulation of Cretan icons, some of which travelled as far as the Balkan hinterland. The Greek inscriptions on the icons, some of them very long, provided valuable factual and prosopographical evidence and emphasise the power of the Greek language -the language of the Church and scholarship- amongst painters, commissioners, and recipients of icons, irrespective of their nationality. [...]