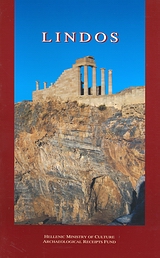 "Lindos is its rock; the rock defines the form of the landscape on the eastern shore of the island, just below the middle, as it juts into the sea, 116 m high, forming one large and one small harbour to left and right (north and south) of it. And above and around this rock, as the Hellenistic epigram says, Lindos «proudly delights in the open sea»" (Chr. Karouzos) (figs. 1-2).
According to the writer Diogenes Laertius, the above epigram was carved on the tomb of Kleoboulos, the "tyrant" of Lindos and one of the seven sages of ancient Greece. His tomb has been erroneously identified with a circular Hellenistic building that dominates the end of the promontory protecting the large harbour of Lindos at the north, which is usually known as the Tomb of Kleoboulos (church of Ayios Aimilanos) (fig. 4). The other, small harbour is named after St Paul the Apostle, because, according to the local tradition, it was here that St Paul disembarked when he visited Rhodes (fig. 3). The beautiful landscape enchants visitors when they first see it while approaching the site, and also during their visit to the sacred rock of the acropolis.
Lindos, together with the other two early cities on the island, lalysos and Kameiros (or Kamiros), is mentioned in the earliest poetical text of Greek literature, the Iliad (II, 655-656), in the passage relating to the part played by Rhodes in the Trojan War, under the leadership of the Heraklid Tlepolemos. The place has also very ancient roots in the mythical tradition, since its eponymous hero, Lindos, was one of the three sons of Kerkaphos and grandson of the god Helios, the founding father of the island, and the nymph Rhodos. According to the same tradition, the sanctuary of Athena Lindia, the most important on the island in ancient historical times, was founded by Danaos on his way back to Greece from Egypt with his daughters.
[...]