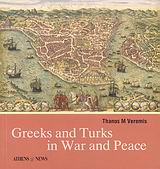 Leading historian Thanos Veremis sheds light on the long nurtured dis trust that persists between the neighbours. At the same time, he highlights the areas of common interest between the two peoples and attempts an interpretation of their psyche, with all that may divide and unite them.

Thanos Veremis is a professor of political history at the University of Athens. He is also the president of the National Council for Education in Greece. He has been Constantine Karamanlis professor at the Fletcher School of Law and Diplomacy and is the author of many books including, "Greece: The Modern Sequel, 1821-2006".
Θέματα:
Ελλάς - Σχέσεις - Τουρκία (327.495 056 1)
Ελλάς - Ιστορία (938)
Τουρκία - Ιστορία (956.1)