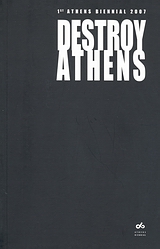 Βιβλίο
Destroy Athens
1st Athens Biennial 2007
Συλλογικό έργο
Manolis Andriotakis
Nadjia Argyropoulou
Olga Chahtzidaki
Demos T. J.
Nefeli Georgakopoulou
Patricia Giannopoulou
Evangelia Ledaki
Kostandia Manthou
Christopher Marinos
Eleanna Pontikaki
Richard Salmon
Despina Sevasti
Thanos Stathopoulos
Μεταφραστής: Thalia Bistikas
Μεταφραστής: Michael Eleftheriou
Μεταφραστής: Memi Katsoni
Μεταφραστής: Klio Panourgias
Μεταφραστής: Dimitris Saltabassis
Μεταφραστής: Titika-Maria Saratsi
Επιμελητής: Xenia Kalpaktsoglou
Επιμελητής: Poka-Yio
Επιμελητής: Augustine Zenakos
Επιμελητής: Theophilos Tramboulis
Αθήνα
Futura
Αριθμός Έκδοσης: 1
2007
σ. 197
Σχήμα: 23χ15
Δέσιμο: Μαλακό εξώφυλλο
ISBN: 978-960-6654-57-2
Γλώσσα πρωτοτύπου: ελληνικά
Τίτλος πρωτοτύπου: Destroy Athens: 1η Μπιενάλε της Αθήνας 2007
Σημειώσεις: Catalogue for the exhibition "Destroy Athens", held in Athens from September 10th to November 18th 2007. Copyright: Athens Biennial, Non for Profit Organisation. Addresses: Georgios Voulgarakis, Nikitas Kaklamanis, Fotis Ignatiou, Pierre de Weck. Main sponsor: Deutsche Bank.
Φωτογράφηση: ΝΑΙ
Κυκλοφορεί
Τιμή: 10.20€ Φ.Π.Α.: 6%
(Τελευταία Ενημέρωση: 10-10-2007)
Περίληψη:
An eclipse of narratives is perceived by many. The reason usually given has to do with this age, a "relativist" or "administrative" age, in which great narratives might appear commonplace, false, or -what is worse- obsolete. And it is true that the fields of public discourse -politics, science, philosophy- largely appear to renounce them. We live in a world where, apparently, the great, the dark, the nebulous issues of existence are to an ever increasing degree objects of theoretical investigation.
In that sense, contemporary art is a privileged field. Although it often seems to have spent much time claiming the capabilities of other disciplines, art continues -in the greatest of its manifestations, at least- to maintain this privilege: it can speak about all that no other can touch, in a way that no-one can imagine before being faced with it. Great narratives, perhaps more than in any other time, belong to art.
This privilege is certainly neither self-evident nor obvious. Even when an artwork manages to conquer it, at least one more thing is necessary so that the work can acquire its meaning. That is the commitment of the viewer, the possibility of his integration into the narrative, in a way that the monologue of the artwork can also become the monologue of the viewer, like a twofold declamation.
The incorporation of such narratives into a wider one is a challenge. From a certain point of view it amounts to hubris. One would not struggle to find many who would consider something like this morally unacceptable. In fact, to be specific, the artists who participate in this exhibition are possibly not the ones one would expect to see -at least not all of them together. Some of them are so different in their objectives and their manner that it would be difficult to imagine beforehand how they might be integrated into the same narrative.
We suggest, however, that a narrative is the mode of articulation that can ensure the following: Every artwork is by itself a complex of multi-faceted readings, which allows us to dive into the chasm that opens before us and identify diversely with it. At the same time, there still exists a basic thread, which we follow, a wide reading that leads us step by step across the course of the story, and so to a particular commitment to the works, to a deep identification with them.
"Destroy Athens" then tells a story. [...]
If there is something that 'Destroy Athens' is not, then it is not a survey.
It does not aim at being a barometer of artistic production at this moment nor teach anybody what is significant today in contemporary art or in the geopolitical circumstances. It does not want to express an opinion about what is important, poignant, interventional or new, it does not wish to argue in favour of a practice or against another, it does not wish to predict where things are heading right now or where they will be tomorrow.
It is a story. We do hope that as a story it has meaning between the moment it begins and the moment it ends.