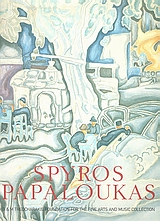 Βιβλίο
Spyros Papaloukas
Συλλογικό έργο
Επιμελητής: Takis Mavrotas
Marina Lambraki - Plaka
Efthymia Georgiadou-Koundoura
Takis Mavrotas
Ζωγράφος: Spyros Papaloukas
Μεταφραστής: Thalia Bisticas
Φωτογράφος: Giannis Vacharidis
Φωτογράφος: Odysseas Vacharidis
Αθήνα
Ίδρυμα Εικαστικών Τεχνών και Μουσικής Β. & Μ. Θεοχαράκη
Αριθμός Έκδοσης: 1
2007
σ. 305
Σχήμα: 30χ25
Δέσιμο: Πανόδετο
ISBN: 978-960-98008-0-8
Γλώσσα πρωτοτύπου: ελληνικά
Τίτλος πρωτοτύπου: Σπύρος Παπαλουκάς
Σημειώσεις: Catalogue of the exhibition held at the Β. & Μ. Theocharakis Foundation, between 8.12.2007 - 20.4.2008. Preface: Basil Theocharakis.
Περιέχει Βιβλιογραφία
Φωτογράφηση: ΝΑΙ
Κυκλοφορεί
Τιμή: 60.00€ Φ.Π.Α.: 6%
(Τελευταία Ενημέρωση: 19-07-2011)
Περίληψη:
Spyros Papaloukas's oeuvre places him among the leading artists of the past century. His works stand out for their perfection of composition, chromatic harmony, expressive frugality esoteric feeling and Greekness in the positive sense. They are filled with Greek light and are pioneering despite their temperate conservatism. Papaloukas refused the sterile mimicry of what was called "Greekness" in the visual arts at the time, in the sense of reiterating mainly Byzantine models, preferring to directly delve into their deeper meaning. It was unthinkable for him to fall into the repetition of earlier forms of expression. He always looked ahead. He believed in the potential of Greek artists and in their attempt to contribute dynamically to the international art scene. This is why his religious icons are a modern expression of traditional hagiography on a purely Byzantine chrornatic scale, like that employed by hagiographers of the time, before the passing of centuries and the soot of the church-goers candles darkened them.

Papaloukas uses the pure media of painting to eχpress himself without fanfare. He does not narrate. He expresses the pulsing vibrations of the beheld. Despite their seeming simplicity, his work are the result of persistent study of the form and the form and the chromatic tones of the landscape, of the object, of the distinctive features of the place, thing or person he paints, which he does with perspicacity and feeling. He explores and highlights all the features of nature that are hidden to untrained eye and by highlighting them, he creates paintings of great worth. His multi-faceted work, steeped in his high aesthetic values. is a field of study for future visual artists. [...]

The Basil and Marina Theocharakis Foundation for the Fine Arts and Music will present Papaloukas's oeuvre, including the paintings, sketches and icons that the unforgettable Mina Papalouka so kindly donated as well as the works Ι have respectfully collected over the last 30 years, along with the ones the artist gave me during our long-standing friendship. Apart from the exhibition of his works on the Foundation's premises, the works will also be exhibited in various cities in Greece and abroad, thus fulfilling our mission towards art and the Foundation's goals.