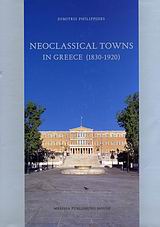 Βιβλίο
Neoclassical Towns in Greece 1830-1920
Dimitris Fhilippides
Φωτογράφος: Yiorgis Yerolymbos
Φωτογράφος: Erieta Attali
Μεταφραστής: David Hardy
Αθήνα
Μέλισσα
Αριθμός Έκδοσης: 1
2007
σ. 320
Σχήμα: 34χ25
Δέσιμο: Σκληρό εξώφυλλο
ISBN: 978-960-204-278-6
Γλώσσα πρωτοτύπου: ελληνικά
Περιέχει Βιβλιογραφία
Φωτογράφηση: ΝΑΙ
Κυκλοφορεί
Τιμή: 73.70€ Φ.Π.Α.: 6%
(Τελευταία Ενημέρωση Τιμής: 09-04-2008)
Περίληψη:
Neoclassical towns cannot be identified with a specific form of town planning in Greece. They are neoclassical because they were designed and built during a particular period of history (1830-1920) in which neoclassical architecture predominated. The neoclassical town is, at bottom, a new situation, a new way of life - it is the clear expression of the modern spirit in the 19th century. It represents, that is, Europeanisation and progress as applied to the urban environment.
This lavishly illustrated book is based on research and photography in the field, and on an extensive study of the relevant sources, from 19th-century newspapers and journals to contemporary monographs. It contains a selection of neoclassical towns from all over Greece: those that are promoted as 'neoclassical cities' (Athens, Patra, Nafplio and Ermoupoli), others that are known as 'historical centres', in which neoclassical features are combined with traditional traces (Symi and Pilion) and, finally, towns in areas that were integrated into Greece at a late date (Chania, Volos, loannina, Thessaloniki and Kavala).
The taking of the photographs proved to be a laborious task; a large part of the neoclassical nuclei of the Greek towns has been rebuilt and is now occupied by apartment blocks. This means that the archive material assembled here has an added historical value: it records much that may no longer exist tomorrow.