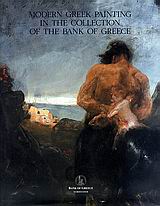 This volume, though building on earlier publications regarding the Bank's collection, is far wider in scope and totally different in concept. It is structured as follows: After the introductory notes by Governor Nicholas N. Garganas and by the author, a section entitled "The art policy of the Bank of Greece" discusses the rationale behind the Bank's decision to set up an art collection and the considerations that have guided acquisitions ever since, and investigates the broadly positive but varying attitudes of the Bank's successive Governors towards art. Then comes a brief chapter entitled "The Collection as a documentation of Modern Greek Art", followed by the three main sections respectively entitled "The 19th century and the turn to the 20th century", "The 20th century" and "Modern Greek printmaking". All three sections begin with a separate introduction that outlines the social, ideological and artistic background of the time and focuses on the most important painters and engravers represented in the collection. The individual works are then presented and discussed one by one. The commentaries do not follow a standard pattern, but typically suggest an interpretation of, or approach to, the work in question and attempt to identify its distinctive features and the style of the artist. Without disregarding the history of each work and its journey from the atelier to the Bank's collection, greater emphasis has been placed on artistic merit. The volume also contains reference notes, the artists' biographies, indexes of names and plates, and finally a select bibliography. [...]
Θέματα:
Ζωγραφική, Ελληνική (750.495)
Ζωγραφική - Συλλογές τέχνης (750.022)
Χαρακτική, Ελληνική (760.495)