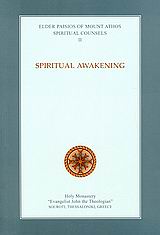 Βιβλίο
Spiritual Awakening
Elder Paisios of Mount Athos
Αθήνα
Ιερόν Ησυχαστήριον Μοναζουσών "Ευαγγελιστής Ιωάννης ο Θεολόγος"
Αριθμός Έκδοσης: 1
2008
σ. 420
Σχήμα: 23χ15
Δέσιμο: Δερματόδετο
Τίτλος πρωτοτύπου: Λόγοι Β΄: Πνευματική αφύπνιση
Α/Α Τόμου: 2
Κυκλοφορεί
Τιμή: 20.39€ Φ.Π.Α.: 6%
(Τελευταία Ενημέρωση Τιμής: 03-02-2009)
Περίληψη:
[...] The second volume consists of five parts. The first part refers to the sense of indifference and irresponsibility prevailing in our time, and to the compelling duty of conscientious Christians to ease the situation through self-correction, prudent behaviour, confession of faith and prayer. At one point, the Elder noted, "I am not saying that we should take up banners and march in demonstrations, but that we should raise our hands towards God in prayer."

In the second part, the Elder kindles the zeal for spiritual work without confining us to a particular struggle. It is then up to each person to take up the struggle, according to his own strength andphilotimo,3 and to live the life in Christ, which is Paradise on earth.

The third part refers to the short occupation period of Satan, which will give Christians the opportunity to witness to Christ again, - as in Holy Baptism, but conscientiously this time -, to struggle against evil and to rejoice in advance for the victory of Christ over Satan. The Elder used to say that the Saints would have envied this opportunity of ours: "Many Saints would have wanted to live in our time in order to take up the struggle earnestly. But it is now up to us... And we are unworthy; at least we should recognize our unworthiness." Effectively confronting the present situation requires the cultivation of a heroic spirit, as well as the spirit of selfless sacrifice.

In the fourth part, which addresses divine providence, faith, trust in God and divine assistance, we are guided toward the source from which we can draw the strength to confront any adversity.

Lastly, the fifth part focuses on the need for and the power of heartfelt prayer, a mighty weapon in combating the ever-increasing evil around us. The monks and nuns are called upon to be in an unceasing "state of alert", much like soldiers in time of war, constantly helping the people with prayer and carefully preventing the distortion of the spirit of Monasticism, and, thus, leaving a leaven for future generations. This last part concludes with a chapter that defines the most profound meaning of life, while reiterating the need for metanoty (change of mind), that is, repentance. [...]