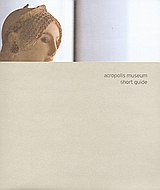 Βιβλίο
Acropolis Museum: Short Guide
Collective Work
Dimitrios Pandermalis
Alexandros Mantis
Alkestis Choremi
Christina Vlassopoulou
Stamatia Eleftheratou
Μεταφραστής: Angeliki Kosmopoulou
Αθήνα
Μουσείο Ακρόπολης
Αριθμός Έκδοσης: 1
2009
σ. 56
Σχήμα: 23χ19
Δέσιμο: Μαλακό εξώφυλλο
Γλώσσα πρωτοτύπου: ελληνικά
Σημειώσεις: Foreword: Dimitrios Pandermalis, President of the Acropolis Museum.
Κυκλοφορεί
Τιμή: 5.00€ Φ.Π.Α.: 6%
(Τελευταία Ενημέρωση: 19-03-2013)
Περίληψη:
The first Museum of the Acropolis was established in a cavity of the hill opposite the Parthenon in 1865. This museum never accommodated the antiquities of the Acropolis in a satisfactory manner, despite successive additions built on to it. Today, the new Museum, ten times larger in size than the original, provides a safe heaven for the masterpieces of the Acropolis and ensures that they are given the prominence they deserve. This is achieved with ideal interior atmospheric conditions, natural lighting, as well as easy visitor access, panoramic views and superior layout of the exhibition areas.

In the international architectural tender of 2001, the winning proposal was submitted by the Swiss architect Bernard Tschumi, Dean of the School of Architecture of the University of Columbia, New York, with the Greek architect Michalis Photiadis. Their design aptly met the needs of erecting a new building with respect to the underlying excavation site, as well as providing visual contact between the Parthenon Hall and the temple itself. […]

The new Acropolis Museum aspires to give visitors the opportunity to discover for themselves the unsurpassed quality of the masterpieces of ancient Athens that have fascinated western civilization. Visitors can enjoy, for the first time, the entire sculpted decoration of the Parthenon as it was on the ancient building, even if this is achieved through combining original sculptures with copies of those in the British Museum.

A detailed guise to the museum will be available shortly, thanks to the concerted efforts of the archaeologists-authors of the present short guide.