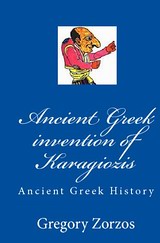 He is the main character of the tales narrated in the Greek theatre of shadows. Karagiozis means 'black-eyed', and it is the origin of this character's name.

The art of the Theatre of Shadows was originally from the ancient Greece. Today scholars generally consider the technique of a single puppeteer creating voices for a dialogue, narrating a story and possibly even singing while manipulating puppets, an Greek invention.

Whatever the case, it is worthwhile to mention that regardless of religious restrictions, shadow theater became more widespread around the 16th century among the Otoman Empire.
Karagiozis seems to have come again to mainland Greece, probably from Asia Minor (Anatolia) in the 19th century, during Ottoman rule. Karagiozis was hellenized in Patras, Greece in the end of 19th century by Dimitrios Sardounis alias Mimaros, who is considered the founder of modern Greek shadow theater.

The genre became a fully integrated, though adapted, amongst the Greek population. But there are several legends as well as studies surrounding Karagiozis's arrival and subsequent popularity in Greece. Some stories say that Greek merchants brought the art from China (after Alexander the Great campaign) and others say that it was a Greek who created the "legend" during all times for the entertainment. [...]