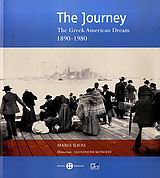 Βιβλίο
The Journey
The Greek American Dream 1890-1980
Συλλογικό έργο
Maria Iliou
Alexander Kitroeff
Nikos Bakounakis
George Tselos
Επιμέλεια: Maria Iliou
Μετάφραση: Michael Eleftheriou
Αθήνα
Μουσείο Μπενάκη
Αριθμός Έκδοσης: 1
2009
σ. 249
Σχήμα: 27χ24
Δέσιμο: Μαλακό εξώφυλλο
ISBN: 978-960-476-050-3
Τίτλος πρωτοτύπου: Το ταξίδι: Το ελληνικό όνειρο στην Αμερική 1890-1980
Σημειώσεις: Proteus ISBN: 960-98174-1-7. Preface: Dimitris Arvanitakis. Copyright of the photos and archives: Maria Iliou. Photographic material from American archives collected by Proteus. This book is based on the film "The Journey: The Greek American Dream 1890-1980" a Proteus production researched, scripted and directed by Maria Iliou and Alexander Kitroeff in his capacity as historical consultant.
Κυκλοφορεί
Τιμή: 40.00€ Φ.Π.Α.: 6%
(Τελευταία Ενημέρωση Τιμής: 24-01-2011)
Περίληψη:
[...] We began in 2005, thinking we were searching for visual material for a documentary on Greek immigration in America. However, having uncovered these treasures, we realized we had first to address the need to copy, disseminate, research and preserve this material. Having been brought into being, the
Archive Preservation Project -which was set up through the non-profit organization, Proteus- embarked on the task of gathering the material together and making it available for an exhibition and an album as well as a documentary and a DVD.

The photographic material very often consisted of forgotten photographs by anonymous photographers donated to various archives by Greek-American families or brought together in private collections. However, some of the photographs are by well-known photographers whose work dealt with immigration in general and included photographs of Greek immigrants. The latter include Augustus Sherman, an inspector on Ellis Island, Jacob Riis, Lewis Hine, Dorothea Lange, Wallace Kirkland and Andreas Feininger as well as two Greeks: Nelly's and Fiotakis. Working in different eras, these photographers have given us priceless images which have since been transformed into memory and history. Not only because they record moments stolen from reality, but because they lay everyday life before us in such a way that it changes over time, and because every photograph is indelibly marked by the aesthetic of the eye that took it and the era in which it was taken.

For "The Journey: The Greek American Dream", Alexander and I told the story of Greek immigration to America and Greek immigrants' lives there using photographs selected from the material Proteus assembled from American archives (plus two taken from the Benaki Museum's photographic collections). We divided their story into three parts:
I. Immigrants: 1890-1920
II. American Citizens: 1920-1960
III. The Revival of Ethnicity: 1960-1980

And as the film, the exhibition and the book gradually took shape, the material and the story it tells helped give shape to an idea we had been nursing from the very beginning. The anonymous photographs and films returned to us our lost collective memory, and this "time regained" not only allowed us to see the present and the future differently, it also brought us face to face with a revelation: that the acceptance of otherness can be of immense value to a society that knows how to evolve and grow. At the same time, the material reminds us just how important it is for us to accept difference now that Greece has become a host nation for immigrants from other lands. [...]