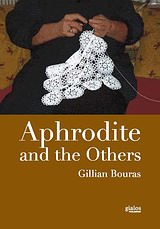 Βιβλίο
Aphrodite and the Others
Gillian Bouras
Αθήνα
Γιαλός
Αριθμός Έκδοσης: 1
2009
σ. 159
Σχήμα: 21χ14
Δέσιμο: Μαλακό εξώφυλλο
ISBN: 978-960-99111-2-2
Περιέχει Βιβλιογραφία
Κυκλοφορεί
Τιμή: 16.15€ Φ.Π.Α.: 6%
(Τελευταία Ενημέρωση: 13-07-2010)
Περίληψη:
"I do not know what I have ever done for Yiayia, except that I have made her laugh often. That much is certain, for she is, I think, fairly convinced that I am mad: eccentric at best, insane at worst [...] Ι do know what she has done for me [. . .] She has shown me another world and extended the boundaries of my own received life. It is an irony that her own small world has made mine larger, that her acceptance of her life's patterns has made me question and redraw the lines and grids of my own, that her oral world has made me more aware of both the privilege and the poverty there is in being literate."

Aphrodite, illiterate wife of a village priest, lived for eighty-eight years in her Peloponnesian village. When she was seventy-two, her Australian daughter-in-law came to visit. And unexpectedly stayed. In writing the story of Aphrodite's life, Gillian Bouras also relates her own story, that of an educated Westerner having to adjust to a woman who was so culturally different, and who was so formidable in her domestic power.

As well, Gillian recounts her slow but absorbed learning of other days and other ways, so that this book is not simply Aphrodites story, but also a counterpoint of the oral tradition and the literate one, the personal and the political, with individual village voices murmuring against the clamour of wider European events.
Θέματα:
Αγγλόφωνη πεζογραφία (Αυστραλία) - Προσωπικές αφηγήσεις (823)