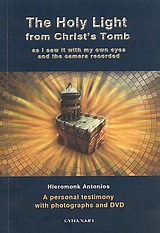 Βιβλίο
The Holy Light from Christ's Tomb
As I Saw it with my Own Eyes and the Camera Recorded!
Hieromonk Antonios
Αθήνα
Συναξάρι
Αριθμός Έκδοσης: 1
2010
σ. 46
Σχήμα: 20χ14
Δέσιμο: Μαλακό εξώφυλλο
ISBN: 978-960-92748-1-4
Περιέχει: DVD
Φωτογράφηση: ΝΑΙ
Κυκλοφορεί
Τιμή: 10.15€ Φ.Π.Α.: 6%
(Τελευταία Ενημέρωση Τιμής: 06-04-2010)
Περίληψη:
This book recounts the exclusive and personal experience of father Antonios Stylianakis, a psychiatrist in Thessaloniki. A few years ago, while on an unsuspecting pilgrimage to the Holy Lands, he was fortunate to see and to record with an amateur video camera, the phenomenon of the Holy Light in Jerusalem. In this way, he became an eyewitness of this miraculous event. And "he saw and believed!"

His specialization at the time, psychiatrist and today, a hiermonk as well, contribute especially to the study of such a sensitive and unknown event, which escapes the usual, logical frame of reference, as well as the bounds of natural phenomenon.

The DVD which accompanies the book, contains the rare footage which the video camera filmed in 1994 and also includeds conversations relevant to the Holy Light.