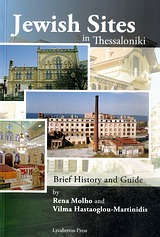 Βιβλίο
Jewish Sites in Thessaloniki
Brief History and Guide
Rena Molho
Vilma Hastaoglou - Martinidis
Φωτογράφος: Yiorgos Pupis
Αθήνα
Λυκαβηττός
Αριθμός Έκδοσης: 1
2009
σ. 74
Σχήμα: 21χ14
Δέσιμο: Μαλακό εξώφυλλο
ISBN: 978-960-7269-49-2
Περιέχει Βιβλιογραφία
Φωτογράφηση: ΝΑΙ
Κυκλοφορεί
Τιμή: 14.13€ Φ.Π.Α.: 6%
(Τελευταία Ενημέρωση Τιμής: 07-12-2010)
Περίληψη:
Thessaloniki has long been considered Greece's foremost multi-cultural city because for many centuries its history has been marked by the peaceful co-existence of Christians, Muslims, and Jews. Between 1492, in fact, and 1912 the Jewish community was the largest of all ethnic communities living here. This thriving community set the tone of Ottoman Thessaloniki, making it known as the most famous Jewish city in the world, widely referred to as the Jerusalem of the Balkans.

Visitors now coming for the first time to Thessaloniki encounter a basically Byzantine city because historical events, such as the devastating fire that destroyed most of the Jewish monuments in 1917 and the annihilation of the Jewish community during the German occupation, erased the city's Jewish character. Reconstruction after the end of World War II, which reached its peak in the 1960s, made the few remaining traces of the two thousand year Jewish presence in the Macedonian capital even less evident.

This informative, small book provides a clear image of the community's long, vibrant history; has short biographies of a few of the community's leading members; and describes (with pictures) the major remaining buildings members of the community constructed. It enables foreign and local visitors to discover, even in part, the surviving traces of the Jewish and multi-cultural nature of Thessaloniki.
Θέματα:
Εβραίοι - Ιστορία (909.925)