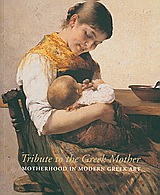 For the Greek society in particular, the figure of the mother enjoys a central position, as it epitomizes the notions of continuity, security, sacrifice, giving, unconditional love. This publication by the Foundation is dedicated to the ways in which the Greek mother has been captured in Modern Greek art. The selected art works trace the mother and child relationship in times of peace and happiness, as well as in times of pain. Moreover, maternity is highlighted, not only as a physical occurrence, but also as a key concept that ensures the continuity of life and forms inseverable ties between generations. […]