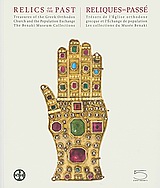 The 90 liturgical objects, icons and vestments displayed in this exhibition originate in areas where medieval and later Greek culture flourished. Their provenance and inscribed dedications indicate the historical course of the Christian populations in the Ottoman empire setting them within the administrative and political framework which enabled them to thrive, and highlight their regional characteristics. The metal-rich land of the Pontos, the Byzantine province of Cappadocia, and cosmopolitan Adrianople, the cross-roads of the Balkan trade routes - these were all elements that moulded the character of these relics. Likewise, the contribution of Constantinople is also manifested in the production and distribution of these artefacts, as ecclesiastical silver and other luxury wares were supplied by the workshops of the capital to both nearby and far-flung communities of the empire.