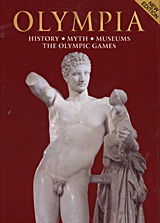 Βιβλίο
Olympia
History, Myth, Museums, The Olympic Games
Ismene Trianti
Panos Valavanis
Μεταφραστής: Alexandra Doumas
Φωτογράφος: Socratis Mavrommatis
Φωτογράφος: Studio Kontos
Αθήνα
Παπαδήμας Εκδοτική
2011
σ. 143
Σχήμα: 24χ17
Δέσιμο: Μαλακό εξώφυλλο
ISBN: 978-960-6791-86-4
Γλώσσα πρωτοτύπου: ελληνικά
Φωτογράφηση: ΝΑΙ
Κυκλοφορεί
Τιμή: 15.00€ Φ.Π.Α.: 6%
(Τελευταία Ενημέρωση Τιμής: 14-06-2011)
Περίληψη:
Olympia was personified as a very beautiful woman with lovely eyes, Grecian nose, and small mouth with pursed lips. Her long wavy hair was drawn back into a chignon at the nape of her neck. This is how she is represented on a coin of Elis, dated to 364 BC, with her name inscribed on the flan, in front of her face: ΟΛΥΜΠΙΑ.
The beauty of Olympia on the coin is comparable to the beauty of the landscape surrounding the site. Rolling hills co-vered with pine woods, small plains planted with vines and olive trees, and stately cypresses surround the area where the Alpheios and Kladeos rivers meet and where the panhellenic sanctuary flourished. Human settlement in the area goes back to the third millennium BC; later, in historical times, temples dedicated to Hera, Zeus Olympios, and the Mother of the Gods, were built in the sanctuary. It was then that the Olympic Games were organized. The sacred area of Olympia was called the Altis, an old Eleian word for grove, used specifically for the sacred grove of Olympia.
Our knowledge of the region is drawn from the texts of ancient writers, particularly the lyric poet Pindar and the traveller Pausanias. Pindar lived from 518 to 438 BC and lauded the victorious athletes in the panhellenic games; Pausanias visited the sanctuary in the second century AD and very diligently recorded everything he saw as well as whatever he gleaned from the exegetai, the "tour guides" of his day. Information about the sanctuary extracted from written sources has been corroborated and clarified through the systematic archaeological excavations conducted at the site since 1874 by the German Archaeological Institute at Athens.
In modern times, the site of Olympia was first identified by the British traveller Richard Chandler who in 1766 correlated the ancient texts that mention its location at the confluence of the rivers Alpheios and Kladeos, with what scant remains of the destroyed sanctuary were visible at ^M
the time. All that could be seen were the orthostats of the Temple of Zeus and the upper part of walls of Roman buildings. The destruction was due to major earthquakes in AD 522 and 551, for which there is evidence all over the region. Fortunately, after the latter earthquake, the River Alpheios flooded and the ruins were covered by silt, up to five metres thick in places.