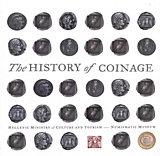 The first coins were made of electrum, a gold-silver alloy, in the end of the 7th century BC in Asia Minor. It was the precious metal that determined the value of a coin whereas its small size made it easy to carry. Later, the symbol of the issuing authority was added which guaranteed the coin's weight and its authenticity. The Greek cities spread its use from Spain to the Black Sea. They used their symbols, heroes, gods, animals, plants etc., to mark their coins. They issued mainly in silver because they had easier access to that precious metal. Bronze coins for the small-scale everyday transactions began to circulate in the late 5th century and especially during the 4th century BC. Philip II of Macedon issued gold coins since he had access to the gold mines on the Pangaion Mountain. After the death of Alexander III the Great, the rulers and kings of every city began to be depicted on their coins.

The image of the emperor became the consistent iconographic type on the Roman coins from the 1 st century BC to the 4th century AD. Roman gold, silver and bronze coins were widely spread in the then known world. On the Byzantine coins, the emperor's image is complemented by the depiction of the divine; Christ, Manus Dei, Virgin Mary and various Christian symbols were chosen for the obverse of the coins. These bore the God and the Emperor, thus reflecting the idea the Byzantines had of their world. From the 4th to the 11th century BC, the Byzantine gold solidus became predominant in the Eastern Mediterranean and beyond. The gold coins issued in Western Europe imitated the Roman and Byzantine coins. The Venetian coinage would become prevalent in this area from the 1 3th to the 15th century while the gold florin of Florence would develop into the basis of commercial transactions in 14th century Europe.

Large silver and later, gold coins were issued from the 15th century onwards, abiding by the new world that arose amidst the discoveries, the new metal ores and the growth of trade; these coins would dominate the world. Spanish, and later Austro-Hungarian, thalers would flow the markets, thus forcing peripheral powers to adapt to the thaler system.

After the French Revolution, the decimal system was established, first in France and then in a large part of the world. Since the 19th century the use of paper currency became popular resulting in the end of the correlation between precious metals and coins. Until recently, the circulation of banknotes depended on gold reserves. The end of the equivalence between precious metal and coins resulted in the change of international economy and marked the universal dominance of digital money.