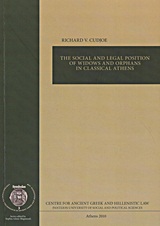 Βιβλίο
The Social and Legal Position of Windows and Orphans in Classical Athens
Richard V. Cudjoe
Ευθύνη Σειράς: Sophia Adam - Magnissali
Αθήνα
Πάντειο Πανεπιστήμιο. Κέντρο Μελέτης Αρχαίου Ελληνικού και Ελληνιστικού Δικαίου
Αριθμός Έκδοσης: 1
2010
σ. 309
Σχήμα: 24χ17
Δέσιμο: Μαλακό εξώφυλλο
ISBN: 978-960-99250-0-6
Συμβολές στην Έρευνα του Αρχαίου Ελληνικού και Ελληνιστικού Κόσμου = Symboles Contributions to the Research of Ancient Greek and Hellenistic Law
Περιέχει Βιβλιογραφία
Κυκλοφορεί
Τιμή: 15.00€ Φ.Π.Α.: 6%
(Τελευταία Ενημέρωση Τιμής: 06-10-2011)
Περίληψη:
The present book is, by and large, a University of Glasgow product. That was where it started life when my preliminary research, initially for an M.Litt. in Classics, came out with the issue of the social and legal position of widows and orphans in Athens of the classical period for a Ph.D. Thesis in 1997. Over the years, since the completion of the thesis and its acceptance by the University of Glasgow in 2001, the idea to have it out as a book had been latent until I had opportunity to be in Athens as a Visiting Research Fellow of the Alexander S. Onassis Public Benefit Foundation that my idea was brought to fruition.

My main efforts in the following pages have been to examine ancient Athenian laws and customary practices that shaped the lives of widows and orphans in classical Athenian society, taking evidence mainly from the Attic orators. The book has two main parts captioned as follows:

Part One: The Athenian Widow in Law and Society;
Part Two: Orphans in Classical Athens.

Among the main issues discussed in part one are the impact of the cycle of external and internal wars, and the other demographic factors on family life and structure, some of the laws and regulations about widows and orphans, and the nature of the archon's protection for widows and orphans in the society. I have discussed also the socio-legal implications of widowhood against the background of the widow's status in the o/Tcos of her deceased husband and her general maintenance and support. One of the two categories of women in classical Athens who, together with male minor orphans, enjoyed special legal protection was the pregnant widow. Thus part one discusses also the status of the pregnant widow in the society. In this chapter, I have attempted to interpret the law cited in section 75 of Demosthenes' speech, 43 Against Makartatus, in Regard to the Estate of Hagnias, to establish how the pregnant widow stood apart from her ordinary widow or woman counterpart in the eyes of the law and society. The final chapter of part one examines the widow's rights to property vis a vis women's property rights in Athenian society.
[...]
(από τον πρόλογο του βιβλίου)
Θέματα:
Αρχαία Ελλάδα (909.38)