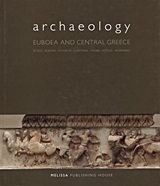 During historical times, this wide geographical region was not a discreet entity with a specific name, as were Thessaly, Epirus or the Peloponnese. Nevertheless, the prefectures of Central Greece (Attica, Boeotia, Phthiotis, Evrytania, Phokis, Aetoloakarnanania), that is, the modern administrative-geographical districts, coincide for the greater part of their territory with the ancient regions that in Antiquity were defined as lands of 'ethne' or tribes. For the long prehistoric era (from the appearance of man to the early first millennium BC), there is, of course, no evidence on the tribally or ethnically constituted regions, since there are no written sources to corroborate such a division. There existed also ancient ethnic-geographical unities (Phokis, Lokris, Doris, Achaia Phthiotis and others) -frequently these too with vague or fluctuating boundaries, like their populations- which do not coincide with modern administrative divisions ot Central Greece. Last, and this too is not unrelated to the archaeological 'human geography' of the Greek Mainland, the Ephorates of Prehistoric and Classical Antiquities of the Hellenic Ministry of Culture supervise small parts of neighbouring prefectures, weaving a singular topographical canvas that complicates the overall study of the ancient tribal territories.
[...]
(από τον πρόλογο του βιβλίου)
Θέματα:
Αρχαιολογία - Ελλάς (930.149 5)