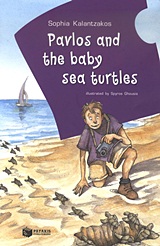 When the nest that Pavlos had been responsible for was found destroyed because of his negligence, Marianna and all the volunteers at the camp turned their backs on him in disappointment. Pavlos took a hard look at the shattered eggs and came to a decision.

He would ask for a new nest, protect it, and become the best volunteer at the camp. He vowed that his baby
turtles would have a chance to embark on life's long journey. Would they make it?
Θέματα:
Παιδικά βιβλία, Ελληνικά - Μεταφράσεις στα αγγλικά (889.91)
Κριτικές - Παρουσιάσεις: