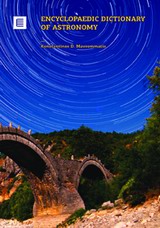 Βιβλίο
Encyclopaedic Dictionary of Astronomy
Konstantinos D. Mavrommatis
Βόλος
Πανεπιστημιακές Εκδόσεις Θεσσαλίας
Αριθμός Έκδοσης: 1
2013
σ. 848
Σχήμα: 24χ17
Δέσιμο: Σκληρό εξώφυλλο
ISBN: 978-960-9439-20-6
Κυκλοφορεί
Τιμή: 40.00€ Φ.Π.Α.: 6%
(Τελευταία Ενημέρωση Τιμής: 18-07-2013)
Περίληψη:
In November 2009 the Astronomy and Space Society, established in the city of Volos, celebrated the "International Year of Astronomy 2009", which has as motto the phrase: "The Universe, yours to discover". During our central celebration event the astrophysicist, director of the Eugenides planetarium of Athens Mr. Dionysis Simopoulos presented my books "Dictionary of Astronomy" and "Dictionary of Astronautics and Space" with such intensity and enthusiasm, that the chancellor and vice-chancellor of the University of Thessaly, Konstantinos Gourgoulianis and Michael Zoumboulakis, respectively, who were present, proposed me to publish the Dictionary of Astronomy in English. I accept this offer and immediately I proceeded to all the steps necessary to prepare such a translation, which is now in your hands.
The science of the astronomy is not stationary but instead it advances in a dynamical way and reveals to us facets of the structure and operation of the Universe all the time.
These new data and some new entries we discovered in the meantime were included in the form of an Addendum at the end of the Greek Second Edition, which includes both additions to the already existing entries based on the latest research results (these entries are labeled "addition") and new entries that were found in the new literature published in the meantime. For easier reference to this Addendum it was printed on a different type of slightly colored paper. In the present English edition the entries of the Addendum have been incorporated by alphabetical order in the main body of the work.
We believe that this Second Edition with Addendum will be also accepted by the leaders and for this reason we want to thank them warmly in advance. Finally, we would like to express our warmest thanks towards the members of the Administrative Board of the Astronomy and Space Society, who accepted to print the present edition.
Θέματα:
Αστρονομία - Εγκυκλοπαίδειες και λεξικά (520.03)