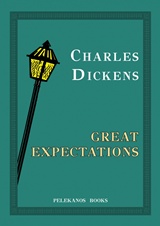 e-book
Great Expectations
Charles Dickens
Αθήνα
Πελεκάνος
2015
ISBN: 978-960-400-949-7
Τεχνικές προδιαγραφές: epub
Διεύθυνση Internet: http://www.e-pelekanos.gr/detail.php?cid=&id=215
Κυκλοφορεί
Τιμή: 1.49€ Φ.Π.Α.: 23%
(Τελευταία Ενημέρωση Τιμής: 26-03-2015)
Περίληψη:
Great Expectations is set in early Victorian England, a time when great social changes were sweeping the nation. The Industrial Revolution of the late eighteenth and early nineteenth centuries automatically led to divisions between the rich and poor. London’s population grew rapidly. More and more people moved from the country to the city in search of greater economic opportunity. With the combination of sewage, coal fires, and unwashed bodies, the odor of London was horrendous. Both the rich and the poor had to contend with the evil air around the city. Great Expectation is the story of Pip, an orphan boy adopted by a blacksmith's family. The narrator, Pip, recounts his life story from his childhood to how he matures and grows up to becoming a young man. Throughout this transformation, one thing remains unchanged. Pip falls in love with a wealthy but heartless girl named Estella. From that moment on, everything Pip does in his life is no longer for himself or anyone else but for Estella and only her. Pip even receives a fortune from a secret benefactor to pursue an education and he does this along with obtaining wealth, success and high social class in the hopes of becoming worthy in the eyes of his beloved Estella.
Θέματα:
Αγγλική πεζογραφία - Μυθιστόρημα (823)