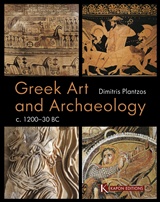 Βιβλίο
Greek Art and Archaelogy c. 1200-30 BC
Δημήτρης Πλάντζος
Μεταφραστής: Nicola Wardle
Αθήνα
Καπόν
2016
σ. 304
Σχήμα: 28χ22
Δέσιμο: Μαλακό εξώφυλλο
ISBN: 978-618-5209-00-1
Γλώσσα πρωτοτύπου: ελληνικά
Τίτλος πρωτοτύπου: Ελληνική τέχνη και αρχαιολογία 1200-30 π.Χ.
Κυκλοφορεί - Εκκρεμής εγγραφή
Τιμή: 55.10€ Φ.Π.Α.: 6%
(Τελευταία Ενημέρωση Τιμής: 25-04-2017)
Περίληψη:
The textbook Greek art and archaeology, written by Greek specialist Dimitris Plantzos and published by Kapon Editions in 2011, was selected by Atlanta-based American publishers Lockwood Press as their first venture into the field of classical archaeology. Translated by British archaeologist Nicola Wardle, the book, which has just appeared, was thoroughly revised and expanded by its author. The English-language edition is distributed in Greece and the rest of Europe by Kapon Editions, who also redesigned the Greek-language edition.
In the five years since its first edition, the book has been established as the standard textbook in the teaching of classical art and archaeology, offered by most Greek university departments where the subject is taught. It surveys Greek archaeology from the collapse of the Mycenaean palaces to the subordination of the last Hellenistic kingdoms to Rome. The author studies Greek art through the material record, and against its cultural and social backdrop. The book’s target audience is archaeology and art students, as well as anyone interested in Greek art and culture. Through concise, systematic covering of the main categories of classical monuments, the reader is taken to a tour of ancient Greece along the most spectacular period in its history, the 1st millennium BC. Architecture and city planning, sculpture, painting, pottery, metallurgy, jewelry, and numismatics are some of the areas covered. The first history of ancient Greek art demonstrating such chronological and disciplinary depth to be published in Greece for almost a century, it is now the first to be taken on by a foreign publisher.
Θέματα:
Αρχαιολογία - Ελλάς (930.149 5)
Τέχνη, Αρχαία ελληνική (709.438 014)
Κριτικές - Παρουσιάσεις: