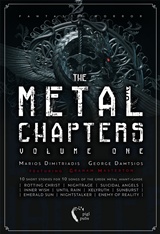 Βιβλίο
The Metal Chapters
10 Short Stories for 10 Songs of the Greek Metal Avant-Garde
Marios Dimitriadis
George Damtsios
Θεσσαλονίκη
Εκδόσεις Πηγή
2018
σ. 202
Σχήμα: 21χ14
Δέσιμο: Μαλακό εξώφυλλο
ISBN: 978-960-626-061-2
Α/Α Τόμου: 1
Κυκλοφορεί
Τιμή: 15.00€ Φ.Π.Α.: 6%
(Τελευταία Ενημέρωση Τιμής: 11-12-2018)
Περίληψη:
We all know the strong connection between metal music and fantasy literature: there are quite a few artists whose source of inspiration is heroes or works of great horror authors. So, the time has come for the opposite to happen!

The authors of this book have joined forces with the greatest Greek metal bands of international appeal, so as to create ten stories inspired by their songs and offer moments of horror and fantasy to the readers. And all this accompanied by music! The readers have the opportunity not only to read the story written by the two authors who have been inspired by each song, but also to read the lyrics of the tracks and listen to the CD that accompanies the book.

The great guest of the collection, the lord of terror Graham Masterton, participates with a short story of his own, for which the authors have written a tribute song.

This anthology shows that in the garden of Greek horror writing some very dark and wonderful flowers are now blooming... but pick them at your peril!