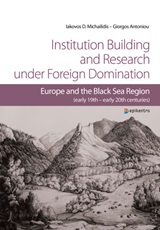 Βιβλίο
Institution Building and Research under Foreign Domination
Europe and the Black Sea Region (early 19th-early 20th centuries)
Iakovos D. Michailidis
Giorgos Antoniou
Θεσσαλονίκη
Επίκεντρο
2019
σ. 280
Δέσιμο: Μαλακό εξώφυλλο
ISBN: 978-960-458-948-7
Κυκλοφορεί
Τιμή: 15.00€ Φ.Π.Α.: 6%
(Τελευταία Ενημέρωση Τιμής: 16-01-2020)
Περίληψη:
The authors of this volume focus on the second phase of the European intervention in the Black Sea Region (BSR), mainly during the 19th century, when the exchange of knowledge between the East and the West became more intense as a result of the opposing political interests of the Great Powers in their effort to penetrate the Ottoman Empire. This was the era of the Eastern Question, the gradual decline of the Ottoman Empire and the transformation of the Black Sea from a "Turkish lake" to an international trade area.

The authors deal with the two dominant Empires around the Black Sea during the "era of Modernity", the Ottoman and the Russian. The history of both Empires highlights aspects of the process of institution building, especially in the fields of religion and education, at a period when ethnic groups and minorities strove for national emancipation.
Θέματα:
Ευρώπη - Ιστορία (940)