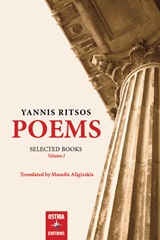 Βιβλίο
Poems
Yannis Ritsos
Μετάφραση: Manolis Aligizakis
Αθήνα
Εκδόσεις Όστρια
2020
σ. 550
Δέσιμο: Μαλακό εξώφυλλο
ISBN: 978-960-604-598-1
Γλώσσα πρωτοτύπου: ελληνικά
Selected Books
Α/Α Τόμου: 1
Κυκλοφορεί
Τιμή: 19.00€ Φ.Π.Α.: 6%
(Τελευταία Ενημέρωση Τιμής: 28-09-2020)
Περίληψη:
Ritsos was a poet who lived in chaotic but exciting times, and like Odysseus, was fated by the gods to take the scenic way home. I am awed by the integrating expanse of his gaze and by the process of his mind that was able to distinguish between reality and its representation... and also by the sense memory in things he projected – things lost – but still things yet to be gained. He was a poet who survived the enchantment of rival impulses, as well as a poet who celebrated the sacred return of the imagination out of the deep ocean that contained him.
– Ilya Tourtidis, M. Ed.,
University of Victoria
Θέματα:
Νεοελληνική ποίηση (889.1)