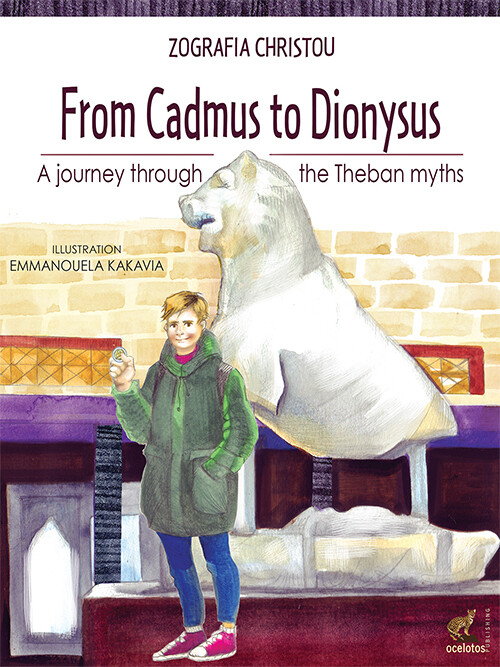 Βιβλίο
From Cadmus to Dionysus
A journey through the Theban myths
Zografia Christou
Εικονογράφηση: Emmanuela Kakavia
Αθήνα
Οσελότος
2020
σ. 36
Δέσιμο: Μαλακό εξώφυλλο
ISBN: 978-618-205-018-7
Γλώσσα πρωτοτύπου: ελληνικά
Τίτλος πρωτοτύπου: Από τον Κάδμο στον Διόνυσο
Εικονογράφηση: ΝΑΙ
Κυκλοφορεί - Εκκρεμής εγγραφή
Τιμή: 12.00€ Φ.Π.Α.: 6%
Περίληψη:
During ancient times the myths were transmitted by word of mouth and were an integral part of everyday life. They were a key element of cultural discourse, which was directly linked to the people’s education and training, giving scope to human values. That is why Greek Mythology is still a source of inspiration and creation not only for the Greeks, but also for the whole western world.
Thebes is one of the oldest cities in Greece and is undoubtedly both historical and one of its most mythical cities. Its mythological background is certainly not limited to the birth and achievements of Hercules; on the contrary, there are numerous myths associated with its founding, the descendants of Cadmus and their fate, the Theban circle and other smaller deities, such as the Cabeiri.
It is therefore worth getting to know some of them, starting with the founder of Thebes, Cadmus, and ending with that - originally from the generation of Cadmus - lucky, divine child, Dionysus, the god of Wine, Feasting, but also of Drama.
Θέματα:
Μυθολογία, Ελληνική - Βιβλία για παιδιά (291.134 950 83)
Μύθοι, Ελληνικοί (398.249 5)