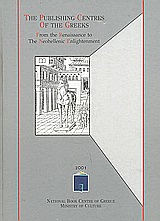 Βιβλίο
The Publishing Centres of the Greeks
From the Renaissance to the Neohellenic Enlightenment
Konstantinos Sp. Staikos
Triantaphyllos E. Sklavenitis
Μετάφραση: David Hardy
Αθήνα
Εθνικό Κέντρο Βιβλίου
Αριθμός Έκδοσης: 1
2001
σ. 221
Σχήμα: 29χ21
Δέσιμο: Σκληρό εξώφυλλο
Σημειώσεις: Preface: Rena Stavridi - Patrikiou.
Περιέχει Βιβλιογραφία
Εικονογράφηση: ΝΑΙ
Φωτογράφηση: ΝΑΙ
Κυκλοφορεί
Τιμή: 18.00€ Φ.Π.Α.: 6%
(Τελευταία Ενημέρωση Τιμής: 16-11-2006)
Περίληψη:
The catalogue (initially accompanying an exhibition) is the history of the publishing centres of the Greeks from the renaissance to the neohellenic enlightenment. The exhibition, the product of arduous research and of profound scholarship, is closely associated with the conviction of the National Book Centre that the dissemination of books, the supporting of research, and the acquisition of knowledge lead not only to social self-awareness, but also to individual freedom. In the hands of the few, the book can become a tool of repression, but in the hands of many it is an instrument of resistance and emancipation.
The subject of the exhibition, the history of the publishing activities of Greeks during a critical chronological period, provides us with the opportunity of learning about the literacy and cultural level of a particular society, by tracing the history of books as the bearers of cultural goods. At the same time, it enables us to form the picture of the unseen mechanisms that drive society, and the nature of its economy, through examining books as merchandise. It reveals to us, finally, the measure of the aesthetic aspirations of society, through a consideration of books as created artefacts.
In chronological terms, the field of research extends from the renaissance to the enlightenment, and, geographically, it includes the most important cities that emerged as major centres of the publication of Greek books. Through its presentation of this field, the exhibition gives prominence of the course followed by Greek society in its quest for and cultivation of those elements of cohesion that formed its national consciousness: language and education. This course was long and complex, and was pursued between the two very different worlds of the Ottoman empire and Europe.
The history of Greek printing is comprised of two large, virtually independent chapters since, from the early decades of the 16th century, the publishing of Greek books began to serve two completely different purposes: the dissemination of Greek letters and the consolidation of Greek studies in the context of renaissance mechanism on the one hand, and spiritual and religious needs on the other.
(excerpts from the preface by Prof. Rena Stavridi-Patrikiou and from the introduction by Konstantinos Sp. Staikos)