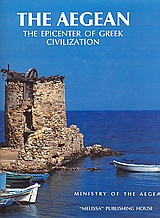 Melissa Publishing House, as part of its "Library of Art" series, is presenting the volume "The Aegean". This work is a contribution not only to the history and the art of the Aegean, but also provides important testimony on Greek civilization. This unique publication, large in size (30 x 25 cm), with 456 pages, containing the original texts of eleven leading experts from Greece, in the fields of history, literature and art, thoroughly covers the history and the civilization of the Aegean.

The book commences with an introduction to the Aegean by the poet Odysseus Elytis (Nobel Prize Winner). Professor Nikos Svoronos presents a synthetic retrospective on the Aegean down through the centuries. In his study Professor Manolis Andronicos examines monuments of art from the ancient Aegean world. Professor Charalambos Bouras and the Byzantinologist Myrtali Acheimastou-Potamianou explore Byzantine architecture and Byzantine art respectively. This is followed by the study of Charalambos Bouras on traditional architecture and town-planning on the islands. The academician Chryssanthos Christou reviews the artistic creation of artists who came from the Aegean islands. The wealth of traditional art, in all its aspects, is exhaustively analyzed by Professor Angelos Delivorrias. Master Anastasios Tzamtzis provides a view of Greek shipping down through time. The ethnomusicologist Lambros Liavas, explores the field of music in the Aegean from antiquity to the present. Professor Christos Doumas considers the contribution of ancient Greek Spirit to the development of Western Thought. The volume closes with an article by Professor Yiorgis Yiatromanolakis on literary production in the Aegean, both in ancient and modern times.

The texts are fully documented by hundreds of colour and black-and-white illustrations and drawings, which were gathered from scores of museums, galleries, foundations and private collections both in Greece and abroad. These are complemented by an analytical, article by article, bibliography, notes and a general index. The authoritative texts, the lavish illustration and the faultless typographic presentation make this volume a brilliant example of the publishing art and at the same time a valuable contribution to Greek civilization.
Θέματα:
Νησιά Αιγαίου - Φωτογραφικά λευκώματα (779.499)
Αιγαίο - Ιστορία (938.97)
Πολιτισμός, Ελληνικός (909.495)