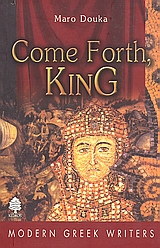 Βιβλίο
Come Forth, King
Maro Douka
Μετάφραση: David Connolly
Αθήνα
Κέδρος
2003
σ. 383
Σχήμα: 19χ12
Δέσιμο: Μαλακό εξώφυλλο
ISBN: 978-960-04-2406-5
Γλώσσα πρωτοτύπου: ελληνικά
Τίτλος πρωτοτύπου: Ένας σκούφος από πορφύρα
Modern Greek Writers
Κυκλοφορεί
Τιμή: 20.38€ Φ.Π.Α.: 6%
(Τελευταία Ενημέρωση Τιμής: 28-07-2010)
Περίληψη:
Who was Alexius Comnenus who would wage war in East and West to save Byzantium from the edge of the abyss? Who were the woman who loved him? Who was it who tried to poison him? Why did his daughter, Anna Comnena, hate her brother, John, the co-Emperor? Why did his wife, Irene Duca, promote Nicephorus Bryennius for the throne?

People and events; failures, tears and sorrows, hopes, visions that faded, joys evaporated, meanness and passion. "Come Forth, King" attempts to revive the final glimmer of Byzantium and to take us back on a journey to those difficult years through the narrative of an insignificant palace member who, now retired to Sinope in Pontus, recalls the past with awe.