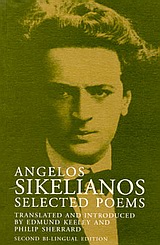 Βιβλίο
Selected Poems
Angelos Sikelianos
Μεταφραστής: Edmund Keeley
Μεταφραστής: Philip Sherrard
Λίμνη Ευβοίας
Denise Harvey
1996
σ. 150
Σχήμα: 21χ14
Δέσιμο: Μαλακό εξώφυλλο
ISBN: 978-960-7120-12-0
The Romiosyni Series 15
Σημειώσεις: Reprinted: Princeton University Press, 1979 Introduced: Edmund Keeley, Philip Sherrard.
Κυκλοφορεί
Τιμή: 10.60€ Φ.Π.Α.: 6%
(Τελευταία Ενημέρωση Τιμής: 16-07-2009)
Περίληψη:
Angelos Sikelianos (1884-1951) is generally recognized as the most important Greek poet between Cavafy and Seferis. This selection, although first published by Princeton University Press nearly twenty years ago, still remains the only collection of his poetry in English in volume form. Both the English and Greek texts of this present edition have been emended. Included here are works from the full range of the poet's career and in his several voices -those of the lyricist, the narrator, the seer. The volume also offers samples of the poet's varied forms, from sonnets to longer narrative and reflective poems, each rendered in a metrical equivalent. An introduction outlines the principal stages of the poet's development as thinker and craftsman in relation to the particular translations included.
For Sikelianos everything in the natural and visibIe world, when rightly perceived, is an expression of a supernatural and invisible order of reality. The task of the prophet, sage, and poet is to reconcile the one world with the other, to heal the dichotomy between them through an act of creative mediation. With this in mind, Sikelianos uses myth not as a rhetorical device but as a mode for revealing the eternal divinities that inhabit the physical world. In his Iate poems, myth becomes the agency for uniting his subjective and narrative voices into a sublime tragic vision.
Θέματα:
Νεοελληνική ποίηση - Μεταφράσεις στα αγγλικά (889.1)