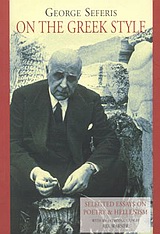 Βιβλίο
On the Greek Style
Selected Essays in Poetry and Hellenism
George Seferis
Μεταφραστής: Rex Warner
Μεταφραστής: Th. D. Frangopoulos
Λίμνη Ευβοίας
Denise Harvey
2000
Ημερομηνία Πρώτης Έκδοσης: 1982
σ. 197
Σχήμα: 21χ14
Δέσιμο: Μαλακό εξώφυλλο
ISBN: 978-960-7120-03-8
The Romiosyni Series 5
Σημειώσεις: Introduction: Rex Warner. Επιλογή από τις "Δοκιμές" του Γιώργου Σεφέρη. Reprinted: U.S.A.: Atlantic-Little Brown, 1966· Great Britain: The Bodley Head, 1967.
Κυκλοφορεί
Τιμή: 10.20€ Φ.Π.Α.: 6%
(Τελευταία Ενημέρωση Τιμής: 12-04-2007)
Περίληψη:
Τhis is the first collection of the essays of George Seferis to be published in English. The selection was made by Seferis himself, drawing upon his prose work written over a period of thirty years. Seferis was a classicist and a humanist, a man of modern sensibility imbued with a deep respect for Mediterranean tradition. He is present iη all these aspects in his essays. When he was awarded the Nobel Prize for Literature in 1963, the citation spoke of "his eminent lyrical writings inspired by a deep feeling for the Hellenic world of culture". Hellenism for Seferis is an enduring style, as alive and as meaningful today as when Homer and Pericles walked the roads of Greece. "If we want to understand the ancient Greeks," Seferis writes, "it is always into the soul of our own people that we should Iook."
Α central group of essays, then, is concerned with the spirit of Hellenism as it continues to manifest itself iη Greek painting, poetry, history, landscape, and religion. But of equal interest are the essays that explore international themes: art and "engagement"; the poetry of Eliot and Cavafy; the theatre of Pirandello; and the role of the artist in the modern world. Admirers of Seferis's poetry will take particular pleasure iη his introduction to his Iong poem "The Thrush", which is followed in this edition by the poem itself.
Various and occasional as these essays are, they are united by the extraordinary sensibility of their author. And they are to be savoured equally for their wisdom, subtlety, and impeccable style.