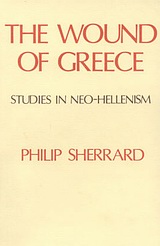 Βιβλίο
The Wound of Greece
Studies in Neo-Hellenism
Philip Sherrard
Λίμνη Ευβοίας
Denise Harvey
1978
σ. 128
Σχήμα: 22χ14
Δέσιμο: Σκληρό εξώφυλλο
Σημειώσεις: Reprinted: London: Rex Collings Ltd· Athens: Anglo-Hellenic Publishing.
Περιέχει Βιβλιογραφία
Κυκλοφορεί
Τιμή: 15.28€ Φ.Π.Α.: 6%
(Τελευταία Ενημέρωση Τιμής: 04-06-2007)
Περίληψη:
Philip Sherrard in his introduction to this collection of his essays writes:
"The Greece of the classical heritage and of the romantic philhellene has gone, and anyhow has always been irrelevant to the Greek situation. Greece is not and never has been a lost paradise or a haνen for tourists or an object of study , and those who approach her as if she were any of these will always fail to make any real contact with her. For to achieve this it is not enough to act in the manner of those who singly οr in droves are to be seen pouring exhaustively and exhaustingly over the Greek landscape, guide-book or notebook in one hand, camera οr tape-measure in the other, hurrying from site to site, from island to island, pausing here to observe the niceness of the view, there the short- comings of the food οr drainage, elsewhere how graced with οr delight- fully free from western virtues the natives are; for this is merely an avoidance of experience οr understanding. He who would wish for these must have a more receptive and unhurried kind of temperament, one that is able to let things be what they are and to express their own natures rather than serve as the raw material for some purpose οr other, be it only one's own pleasure. He must have sought out not the past but the living fate of Greece, which is not a doom but a destiny, a process rather in which past and present blend and fuse, in which nature and man and something more than man participate: a process difficult, baffling, enigmatic, with its element of magic, its element of tragedy, working itself out in a landscape of bare hills and insatiable sea, in the miraculous cruetly of the summer sun, in the long generations of the lives of the Greek people. The essays in this book are an attempt, not indeed to define this destiny or this process (for that is impossible), but to indicate, through the lives and writings of Greeks themselves, something of their quality, as well as of the complexity of the forces -historical, cultural, social- which have helped to shape them".