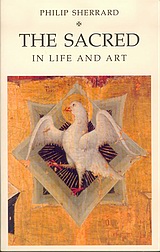 Βιβλίο
The Sacred in Life and Art
Philip Sherrard
Λίμνη Ευβοίας
Denise Harvey
2004
σ. 162
Σχήμα: 21χ14
Δέσιμο: Μαλακό εξώφυλλο
ISBN: 978-960-7120-18-2
Σημειώσεις: Επανέκδοση: Golgonooza Press, 1990.
Περιέχει Βιβλιογραφία
Κυκλοφορεί
Τιμή: 12.23€ Φ.Π.Α.: 6%
(Τελευταία Ενημέρωση Τιμής: 12-12-2006)
Περίληψη:
We are becoming increasingly aware that the forms of our life and art - of our modern civilization generally - have over the last few centuries been characterized by the progressive loss of precisely that sense which gives virtually all other civilizations and cultures of the world their undying lustre and significance: the sense of the sacred. In fact, the concept of a completely profane world - of a cosmos wholly desacralized - is a fairly recent invention of the western mind, and only now are we beginning to realize the apalling consequences of trying to order and mould our social, personal and creative life in obedience to its dictates. It is not even too much to say that we are also beginning to realize that unless we can re-instate the sense of the sacred at the heart of all our activities there can be no hope of avoiding the cosmic catastrophe for which we are heading.
This book is an attempt to clarify what is demanded if we are to have any chance of achieving this. It examines the nature and significance of the sacred itself, why the sense of its presence has been eroded from our consciousness over recent centuries, how we can re-awaken this sense, and what such a re-awakening must mean in terms of our personal and creative life. It complements the author's "Rape of man and nature", and "Human image: World image" (both of which focus on the emergence of the thought-forms whose ascendancy has produced our present state of dereliction and chaos) affirming as it does the ever-present, timeless qualities of beauty, love and miracle through which we can be renewed and transformed, whatever the conditions of the world in which we live.
Θέματα:
Τέχνη και θρησκεία (291.17)