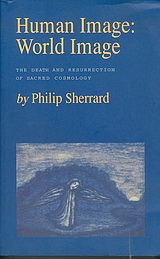 Βιβλίο
Human Image
World Image: The Death and Resurrection of Sacred Cosmology
Philip Sherrard
Λίμνη Ευβοίας
Denise Harvey
2004
σ. 187
Σχήμα: 23χ13
Δέσιμο: Μαλακό εξώφυλλο
ISBN: 978-960-7120-17-5
Κυκλοφορεί
Τιμή: 14.27€ Φ.Π.Α.: 6%
(Τελευταία Ενημέρωση Τιμής: 30-07-2015)
Περίληψη:
It is now only too evident that the revolutionary changes in mental outlook that took place in western Christendom some three or four centuries ago, and that produced the modern scientific movement, are the major cause of the crisis in which the world finds itself today. Yet the terrifying consequences of the practical exploration of modern science are usually attributed not to modern science as such -and still less to the mental picture of the universe which it presupposes- but simply to its misapplication and abuse. We are even told, with a naivety that is as inconsequential as it is typical, that modern science must be good because what it true cannot be evil and since modern science works, or produces results, it must be true.
This book attacks such misconceptions head-on, and at the deepest level. By setting the modern scientific picture of the universe and man's place in it against the background of pre-Christian and Christian cosmology and anthropology, the author shows unambiguously how our acceptance of this picture has literally enslaved us to a vast collective lie whose ramification in the major spheres of our thought and action cannot but vandalize and desecrate both ourselves and the world we live in. The thesis is presented with clarity, eschewing sensationalism and appealing to the disciplined intelligence and its capacity for coherend discourse. The last and perhaps most challenging chapter formulates a cosmological vision in the personalized terms of the sacred mythology of the Christian tradition.
Θέματα:
Θρησκεία και επιστήμη (291.175)
Κοσμολογία (523.1)
Θεολογία (230)