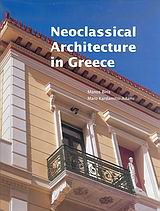 Βιβλίο
Neoclassical Architecture in Greece
Manos Biris
Maro Kardamitsi - Adami
Μεταφραστής: David Hardy
Αθήνα
Μέλισσα
2004
σ. 312
Σχήμα: 30χ25
Δέσιμο: Σκληρό εξώφυλλο
ISBN: 978-960-204-250-2
Περιέχει Βιβλιογραφία
Φωτογράφηση: ΝΑΙ
Κυκλοφορεί
Τιμή: 69.66€ Φ.Π.Α.: 6%
(Τελευταία Ενημέρωση Τιμής: 04-01-2007)
Περίληψη:
The establishment of the Modern Greek State in the late 1820s, after four centuries of Ottoman rule, marks a crucial development in the long history of the Greek nation. Both socially and culturally the state adopted a firm orientation towards urban progressivism. New towns were built and older ones were radically changed. As one would expect, nineteenth- century urban architecture in Greece stemmed from European classicism, since European culture in general played a vital role in the life of the young state. What is most important, though, is that this architecture developed in the shadow of its superb models, i.e. the monuments of classical Athens and the Acropolis.
The outcome was unique: a neo-classical architecture of exceptional quality and lasting application.
Beside Athens, a great number of cities and towns in various parts of Greece followed the above architectural trend either in the form of neoclassicism or of late historicism. Such was the urban build enviroment in Greece up until the early 20th century, with remarkable buildings, both architecturally and artistically, that today attracts an intense and growing interest.