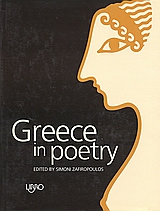 In this book, the reader is invited to discover -or rediscover- Greece through its poetry, and to enter into the world from which have emerged those ideals of democracy, reason, and freedom that remain at the core of any civilization that hopes to endure.

This invitation is extended in the form of words and images: in English-language selections from the ancient epic poems of the "Iliad" and the "Odyssey", in the lyric poetry of Sappho, in the dramatic power to "Prometheus"; in poetry from the Byzantine era; in words that flow from the pens of modern Greek poets -Solomos, Cavafy, Kazantzakis, Ritsos, and the Nobel Laureates, Seferis and Elytis- joined by the voices of poets who have written in English about Greece, Greek life and tradition -Lord Byron, Shelley, Keats, Milton, Wilde, Durrell.