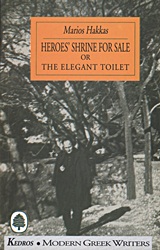 Βιβλίο
Heroes' Shrine for Sale or the Elegant Toilet
Marios Hakkas
Μετάφραση: Amy Mims
Αθήνα
Κέδρος
Αριθμός Έκδοσης: 1
1997
σ. 110
Σχήμα: 21χ14
Δέσιμο: Μαλακό εξώφυλλο
ISBN: 978-960-04-1333-5
Γλώσσα πρωτοτύπου: ελληνικά
Τίτλος πρωτοτύπου: Ο μπιντές. Το κοινόβιο. Ο τυφεκιοφόρος του εχθρού
Modern Greek Writers
Κυκλοφορεί
Τιμή: 7.64€ Φ.Π.Α.: 6%
(Τελευταία Ενημέρωση Τιμής: 28-07-2010)
Περίληψη:
Kesariani, once you were a star; for a moment you shone in the firmament and then, you vanished for ever into the void of history... There's nothing left. Now you're plastering the last traces of gunshots on your forehead, like an old dog licking its wounds, where the scar has healed."

Marios Hakkas lived almost all his tragically short life close to the Athenian neighbourhood of Kesariani, in the shadow of Mount Hymettos. Throughout the Nazi Occupation of Greece, this district was the symbol of Greek Resistance and Hakkas' stories are indelibly marked by the blood-stained events of the Kesariani "Skopeftirio" (Shooting-Ground), where at least a thousand Greek Partisans sacrificed their lives. With sharp irony, but also occasional flashes of elegiac lyricism, Hakkas laments the loss of this valiant spirit. Wrathfully, he imagines the once heroic Shooting-Ground being sold out to land-grabbers, interested only in profiteering and money-grubbing shop-owners. The acquisition of a newfangled "elegant toilet" becomes the symbol of this new Kesariani, where disappointed ex-idealists are no longer able to dream or even to remember their recent struggles. However, the last story in the last book records the voice of a single lad, killed while resisting, and this outcry remains vibrantly alive, demanding justice from future generations.