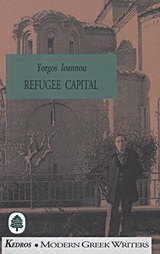 In the prose pieces and essays that make up Refugee Capital their story is told, often through the eyes of an adolescent narrator recreated by a writer at the peak of his powers. Yorgos Ioannou sets out to rescue the enduring from the clutches of the ephemeral, to reconcile the irreconcilable, to harmonize the discordant. So he does. And brings an entire city, and its inhabitants, to life in all their fractious diversity.